Rick Passey, Sales Manager for Kirkpatrick’s Central Division, says their team helped in the construction of the very first ServisFirst headquarters only a few miles away. “We did a development with them five or six years ago. And apparently, they’ve outgrown that 2009 office. We were thrilled to again be a part of the team,” he says.

Designed by Giattina Aycock Architecture Studio, the new headquarters is being built on a narrow, 4.5 acre lot in a heavily populated area. Positioned alongside a major thoroughfare, the construction site’s busy location and tight access required a lot of long nights and careful coordination by ConcreteSouth’s dispatch personnel. 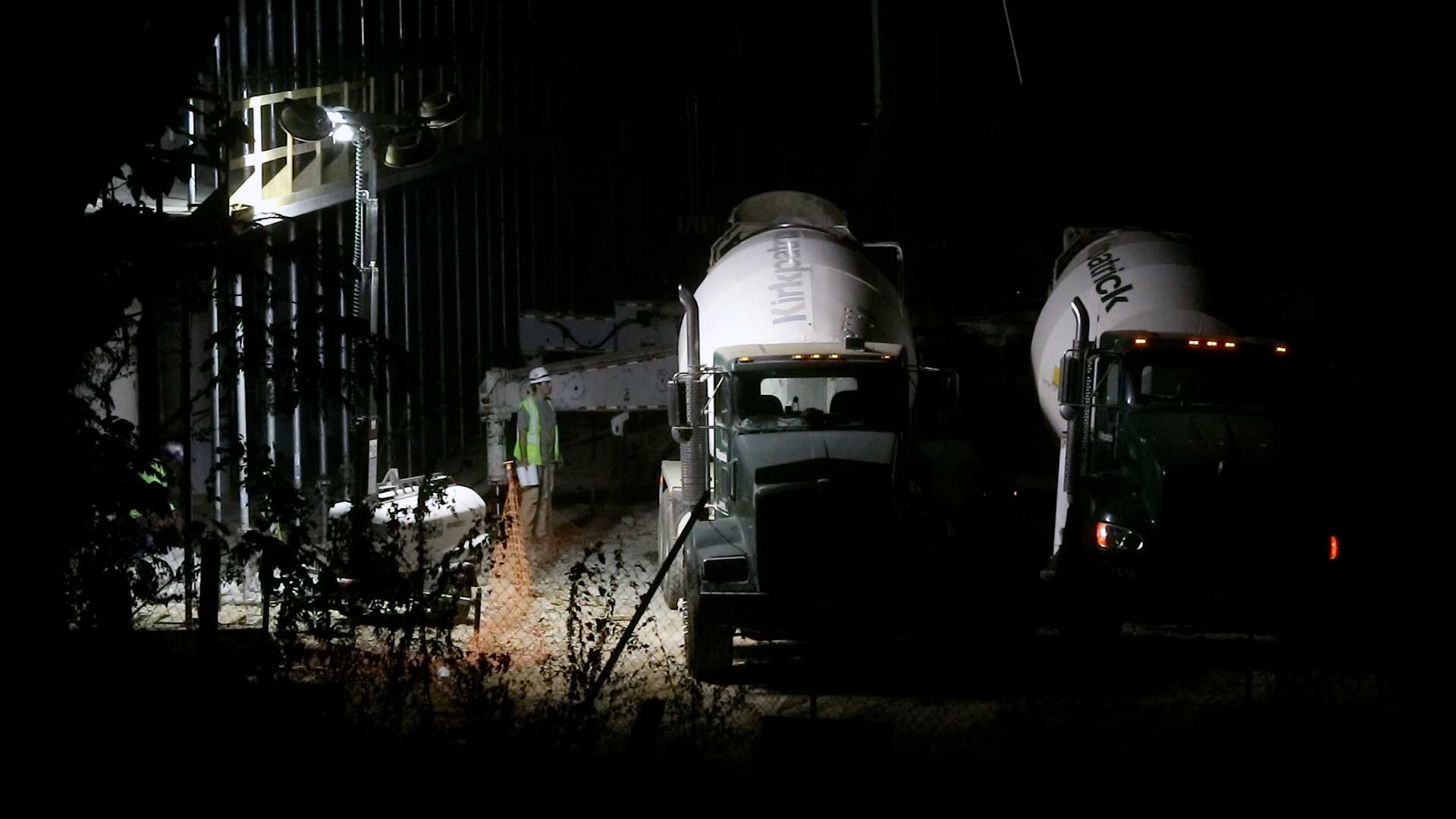 “All the major placements were made at night,” says Passey. “We fought concrete temperatures. It had a 90-degree maximum concrete temperature specification, so nights are more conducive for delivery. In addition, this job site is in a very busy part of town along the Red Mountain Expressway, a major artery. To be able to do this work at night without a lot of traffic concerns really helped us provide the production rates that they needed.”

B.L. Harbert International is the general contractor on the job while ARD Contracting is the turn-key concrete contractor. Maintaining each night’s rapid pace of production required a dedicated team to just to direct truck traffic entering and exiting the construction zone.

“The job site is very crowded,” says Passey. “It’s a compact site with a vertical building on it. There’s not a lot of room around the site. A lot of attention had to be paid with how we entered and exited the site. The contractor did an amazing job of maintaining enough people to help us on the site where we all we had to do was basically be concerned about was the delivery rate of the concrete and the quality of the concrete.”

“ARD did a tremendous job not only directing traffic but providing wash-out areas making sure those areas were staffed, that the drivers knew where to go. It was very well lit despite the despite the crowded and cramped conditions of it,” Passey says.

Because the site is also near a major hotel and residential area, each nighttime pour faced restrictive hours which required additional attention. “Harbert did a wonderful job of coordinating all that and making it easy for us,” says Passey. 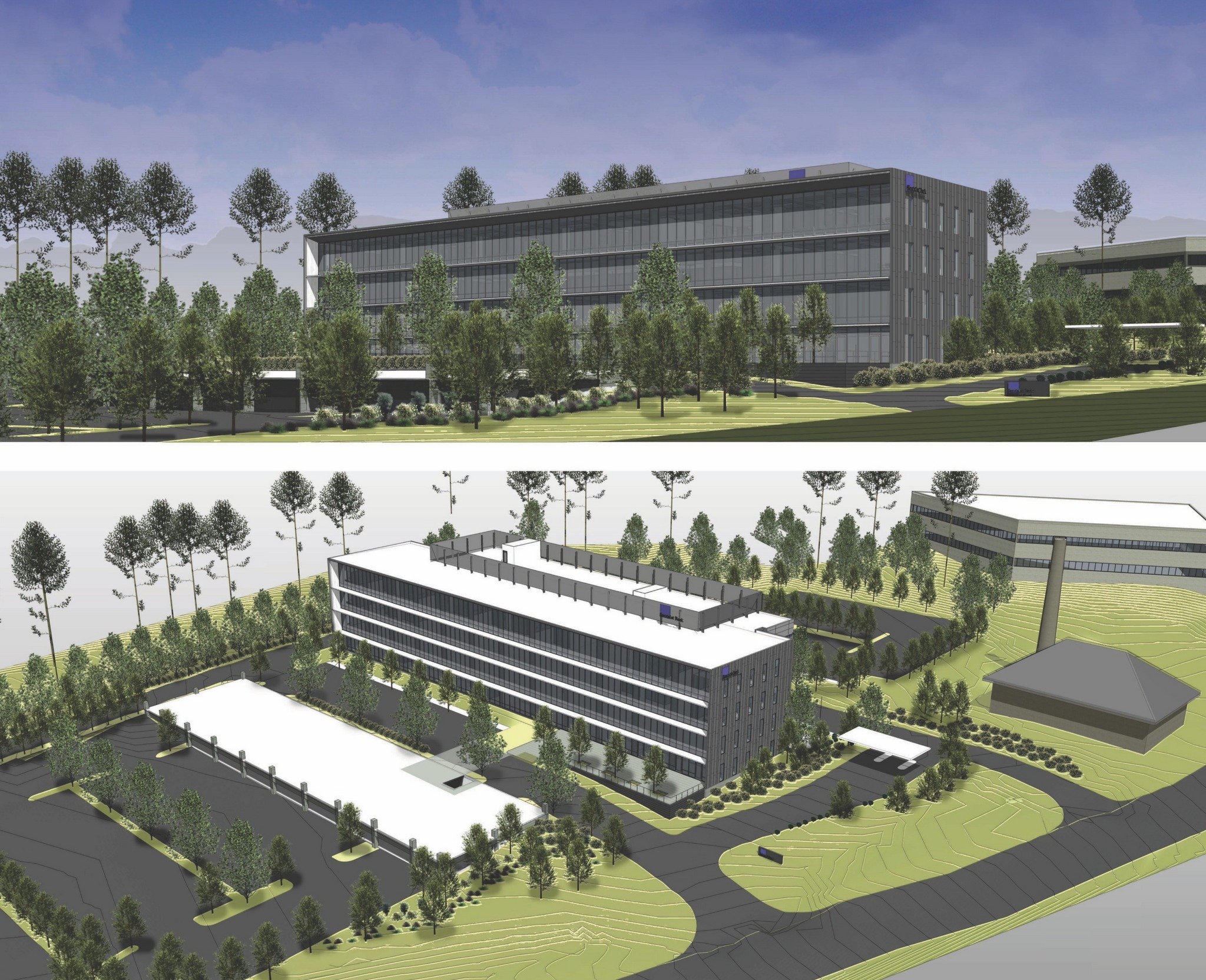 The five-story structure features a unique design with glass and a lot of concrete. “This is a different kind of structure,” says Passey. “Post tension concrete slabs, elevated slabs, a rather large foundation slab on grade, concrete columns. They will also have a two-story parking deck which will be just on the low side of the site and again concrete frame, concrete structure.”

The building’s interior will feature a number of exposed concrete columns that required high-structural strength along with a smooth, blemish free appearance. “Some extra attention had to go into the mix designs for those,” Passey notes. “We even played around with the idea of a self-consolidating concrete. We poured some sample panels of that and then we poured another higher early column mix with a lot of super plasticizer in there. That’s ended up ended up being what they went with for the columns that were going to be exposed. That mix design required very little vibration or consolidation efforts on the contractor’s part to get a very smooth finish.”

When complete, the new ServisFirst headquarters on Woodcrest Drive will have the capacity to handle up to 440 workers. The finished structure, opening in 2018, is expected to serve the bank for the next 10-15 years.

“Harbert did a tremendous job of bringing everyone together. They were very accommodating to work with schedule wise and we were very pleased to get yet another opportunity to work ARD Contracting,” says Passey.