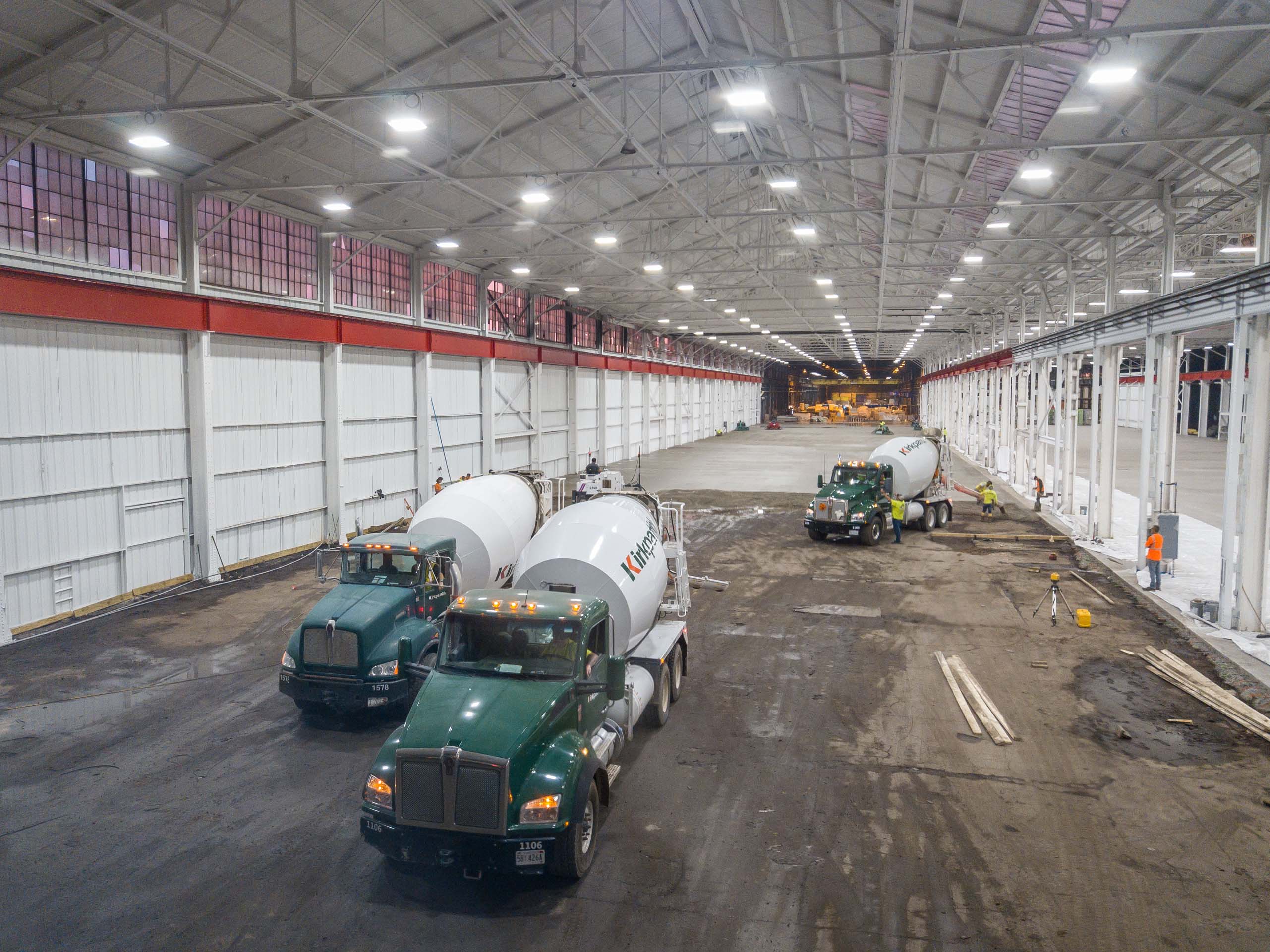 Kirkpatrick Concrete recently supplied a custom mix design and the delivery know-how to meet the needs of a unique industrial project: the rehabilitation of concrete factory floors dating back to 1929. It’s all part of the expansion of BLOX, a company that designs and manufactures prefabricated building modules for the healthcare industry.

Their manufacturing site in Bessemer, Alabama dates back to 1889 when it was originally part of the Tennessee Coal Iron and Railroad Company. It later opened as a Pullman Rail Car plant in the late 1920’s. Over the next 50 years, the site grew, adding more and more production lines to turn out thousands of rail cars and eventually employing as many as 1600 people. Those assembly lines were idled when the massive operation finally ground to a halt in 1981.

The existing assembly buildings are perfect for the task, but the concrete floors, worn down by decades of industrial activity, required extensive rehabilitation to meet the levelness and flatness tolerances required for a modern assembly line.

The BLOX team turned to Kirkpatrick Concrete to supply new concrete for the old facilities. “We worked with the BLOX engineers for about 90 days to help perfect a mix design,” says Kirkpatrick General Manager, Keith Rickles. “We did a series of trial batches and worked very closely with the engineers and owners.”

Rickles says to help the BLOX team zero in on a final mix design, the company conducted a test pour at their downtown Birmingham lab so they could see the concrete in action. “We ended up with a 4,000 PSI mix design that used a mid-range water reducer, a superplasticizer, microfibers, and a shrinkage reducing admixture,” he says. “The final design performed very well in the field.”

Once the mix was settled upon, the next step involved formulating a complex, three-night plan to actually get the material on the ground. “We had a lot of pre-pour meetings with the BLOX owners, superintendent, and foremen,” notes Rickles. “One of the things they wanted was to make sure we could batch 220 yards an hour and get 180 yards an hour on the ground each night.”

To meet that aggressive delivery rate Kirkpatrick pulled their entire team together, tapping two nearby plants to service the job. “Over the course of those three nights we really staffed up on site,” says Rickles. “We had a ticket runner at each plant, we had a QC person per plant, we had somebody putting fiber in per plant. We also had a mechanic and two plant maintenance people with us at all times. We had backup cement storage, a backup air compressor, a backup generator, rented light units. We really geared up for the logistics of this complex project.”

Crews reported to work at 10:30 p.m. checking equipment and prepping delivery trucks. By 11:30, drivers were on the road headed to the Bessemer Industrial Park. “From our Lakeshore plant the job site was 4.2 miles away and from Gardendale it was about 17.5 miles,” says Rickles.

Rickles says over the course of three nights, the delivery rate for the project averaged 175 yards an hour. “At peak, we batched 242 cubic yards in one hour out of those two plants,” he says. “On site, we could get six trucks wide and discharge all of them at the same time. We had somebody at the entry point, somebody staging trucks, somebody handling shoots, somebody helping with the wash down.”

Fleet manager Matt Tracy coordinated the continuous arrival of mixer trucks, an effort that involved 26 drivers. “We pulled drivers and staff from everywhere,” he says. “Drivers stayed in their trucks, we handed the tickets to them, we checked the loads for them. We were trying to make their lives as easy as possible. They've got the hardest part of this so we want to do all we could to make this a good experience for them as well as for the finishers and the owners.”

The brisk pace kept forming and finishing crews busy. The delivered material was poured directly atop existing battered slabs. Between six and a half to 10 and a half inches of concrete was needed to level out the new surface. “There were a lot of unique properties about this old building,” says Rickles. “They didn’t wet up anything. They really had to pile the concrete up then work with it from there with laser screeds.”

By sunrise, drivers washed out their trucks for the final time. Inside, the old, battered factory floor was already gleaming with a fresh flat surface ready for another hundred years of service.

Rickles says this rehab project represents a new approach for Kirkpatrick. “This project is a perfect showcase of what great customer service can do,” says Rickles. “We were proud to have a very smooth pour of 1000 to 1200 yards slabs a night that went exceedingly well."

“We’ll never beat the big guys on price or be the low-price producer. That's not what we're here to do. Today, Kirkpatrick is really focusing on the customer service side of things and truly partnering with owners and the general contractors in the area. And so, that's a different type of relationship.”