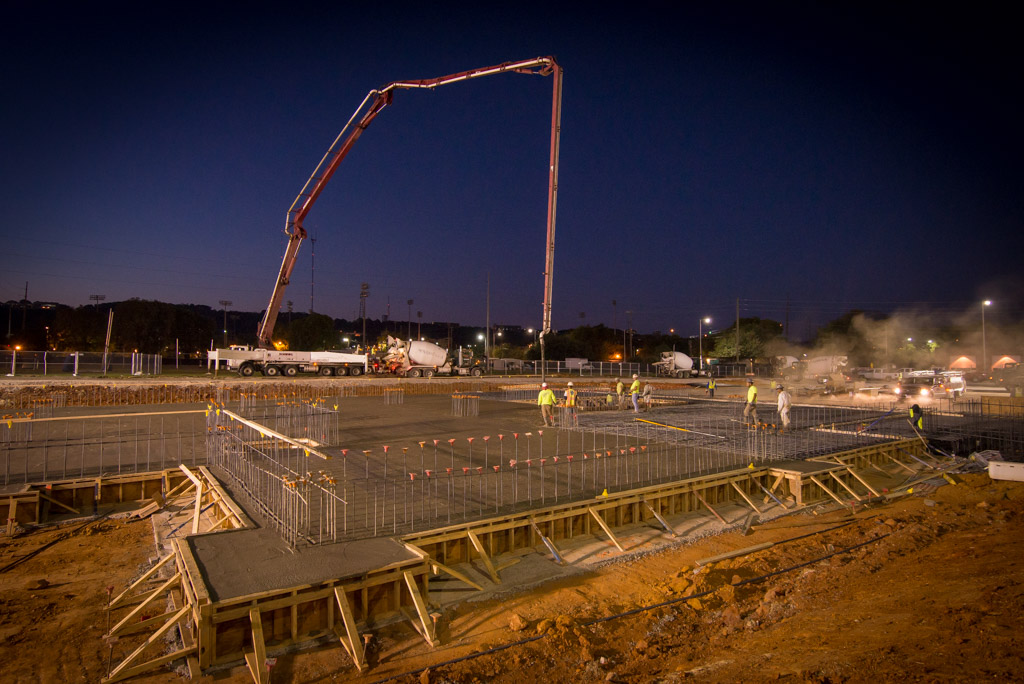 The football operations center on the campus of the University of Alabama at Birmingham (UAB) features a massive concrete foundation that required careful coordination with multiple contractors to place.

The main building of the UAB's Football Operations Center officially opened in August 2017, just two weeks before the return of the UAB Blazers to college football. One year earlier, UAB broke ground on the $22.5 million football operations center which included a $4.2 million covered pavilion practice field known as Legacy Pavilion.

Kirkpatrick’s Rick Passey details the unique challenges of this fast-tracked project. “UAB decided to upgrade their facilities in terms of a new football operations complex,” Passey says. “The project included new athletic offices, a new weight room, and several therapy pools. It’s a large concrete project in the fact that it’s got a huge concrete foundation to it instead of the more typical spread footings or caissons. This is just a huge foundation mat that they have poured for this project.”

Overnight placement of the concrete was conducted by Lithko Contracting, LLC and overseen by M.J. Harris Construction Services. “[It was] an opportunity for us to work with Lithko for the first time. Lithko is a contractor that’s fairly new to the Birmingham market. They do work all over the Southeast and all over the country. This gave us an opportunity to provide concrete and service one of their projects which we really appreciated,” says Passey.

Passey says Kirkpatrick has worked with UAB in the past on other building projects, but this was the first to include a large mass concrete pour. “For example, the baseball field which is just to the north of this project had its own set of subterranean features that required a whole different foundation system. For this location, they decided that either driving piles or drilling caissons wasn’t going to work. So they basically poured a 2000 cubic yard foundation mat over a mud mat and the whole thing provides support for this building. That's the first time I’ve ever seen such a design in a project for UAB.”

Passey says delivery challenges for this project primarily centered around the two large foundation pours. “Both of them were over a thousand cubic yards,” says Passey. “In coordination with the contractor, we decided that weekends would be the best time to do this due to traffic concerns around UAB.

Kirkpatrick delivered about 140 to 150 cubic yards an hour to the job site. “That necessitated quite a bit of our fleet. We felt it best to do it at a time when we could devote resources to the project. Not just drivers, but also production people, quality assurance people and our sales staff to help direct traffic on the site.”

Kirkpatrick’s laboratory also worked closely with project’s contractors to develop a special mix design suitable for the mass concrete pour. “The folks in our lab are a genius when it comes to knowing how concrete is going to act, what the demands of the placement are and what we need to do to maximize performance of our concrete. That group worked a great deal with the mixes.”

Fly ash was used in the mix which helps keep the material within temperature specifications. “Fly ash is good for controlling the temperature of the concrete because there’s not quite as much cement in there yet. The total cementitious content of the concrete still allows for later strength gain. They really weren’t in a hurry for any higher or early concrete strengths which is very difficult to achieve with mass concrete anyway. So we made maximum use of our fly ash substitution in the concrete mixture.”

HOK of Kansas City, along with Goodwyn Mills & Cawood (GMC) of Birmingham were architects for the project.