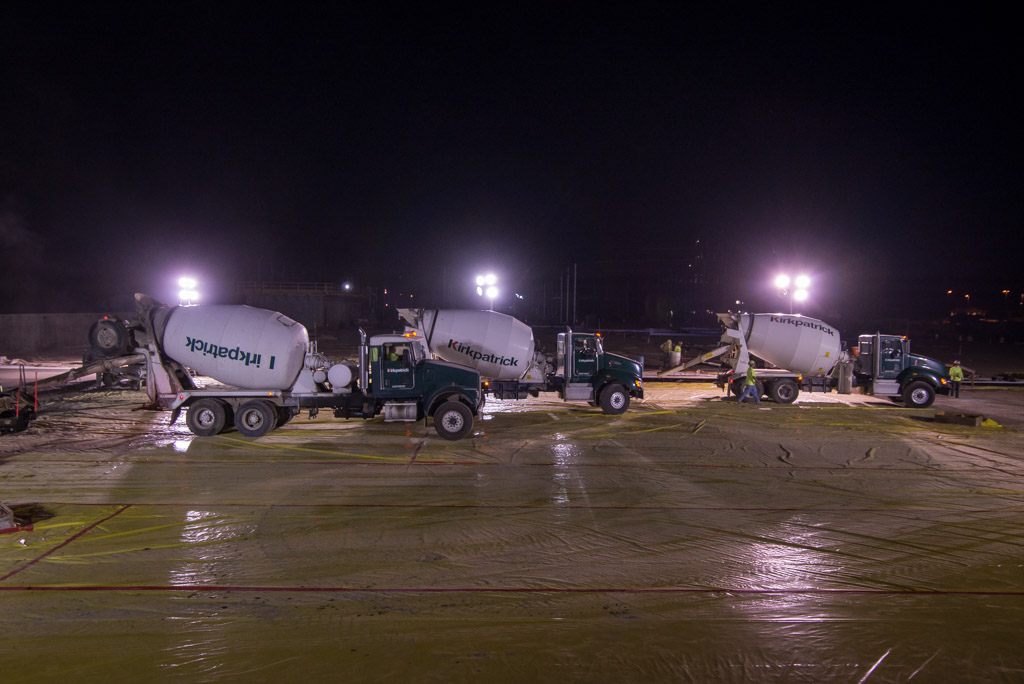 Kronospan, a worldwide producer of laminated wood products, completed a multi-million dollar expansion of their production facilities located near Oxford, Alabama. Some 20,000 yards of concrete, and a lot of overnight pours, were required to complete the massive project.

Kirkpatrick Concrete drivers began work in the middle of the night, many times starting just after 1 a.m. to create a caravan of trucks transporting concrete to the job site. This is nothing new for Kirkpatrick.

Rick Passey, General Manager of Kirkpatrick Concrete's Central division, says that distance was one of the primary challenges of the Kronospan placement. “It was over 20 miles from our primary plant,” says Passey. ”With that big round trip time we had two plants online at all times in case something were to happen.”

The all-night operation was part of a lengthy project to expand the production facilities of Kronospan, a worldwide producer of laminated wood products. “Kronopan is one of the largest flooring manufacturers in the world,” Passey says. “They built the first phase of their plant in about 2005. We worked in a joint venture with ARD back during that first phase. This time they put it out for bid and we are the sole provider for it.”

ARD Contracting, Inc., based in Birmingham, Alabama, was selected to place building foundations, slab on grade, equipment foundations, and concrete paving for the expanded manufacturing facility.

Located near the city of Oxford, Alabama, this busy job site required the skill and combined effort of the entire ConcreteSouth team. From dispatchers and drivers, to sales and quality control, each team member focused on one common goal: work hard to ensure a successful, consistent placement.

“It takes a tremendous amount of coordination not only not only amongst the operations guys at the plant and in the field but also coordinating what’s happening at both plants. A lot of times both plants are involved with the production and delivery. There’s constant communication between our sales guys and quality control guys out there on the site. They’re giving feedback to the guys back at the plant about any adjustments that need to be made to the mixes or delivery rates. So there’s a constant communication that goes on,” Passey explains.

And, as with all ConcreteSouth projects, safety is a critical part of the complex operation. “Obviously safety is a concern,” says Passey.” We have to be very aware of our surroundings. It’s a very crowded job site, there’s a lot of activity, equipment, and people moving around. So we try to be very aware of our surroundings, making sure that drivers are always out of the truck surveying where everybody is and just trying to be where they’re supposed to be.”

Steel fiber was also added to the concrete to provide a strong surface to stand up to wheeled traffic such as forklifts. “One of the unique factors about this project as well is the addition of steel fiber into a lot of the slab pours. That required extra manpower, extra time, and we tried to do it without affecting the delivery rate. In the past, we used a conveyor to load the steel fiber. This time, we directly fed it into some of the loading hoppers which greatly decreases the loading time, enabling us to provide greater production rates on the pour site.”

To meet the project’s stringent requirements, some portions of the project were placed with a laser-controlled screed for precise leveling. “Some of the concrete was pumped, some of it was done with a laser screed. So those presented some of their own challenges, but the mixes themselves were pretty straightforward, basic admixtures. When we use the steel fiber, we use mid-range water reducers to help increase the slump and improve the ease of placement,” Passey says.

In the end, it took around 20,000 cubic yards of concrete and a lot of late nights to complete the Kronospan project.Passey recalls the project with pride. “It’s quite a ballet when you have 20 trucks on a concrete floor. We’re very proud of the successful outcome.” The delivery rate and distance was a challenge, but the ConcreteSouth team came together to overcome them all during the long nights of the Kronospan placements.