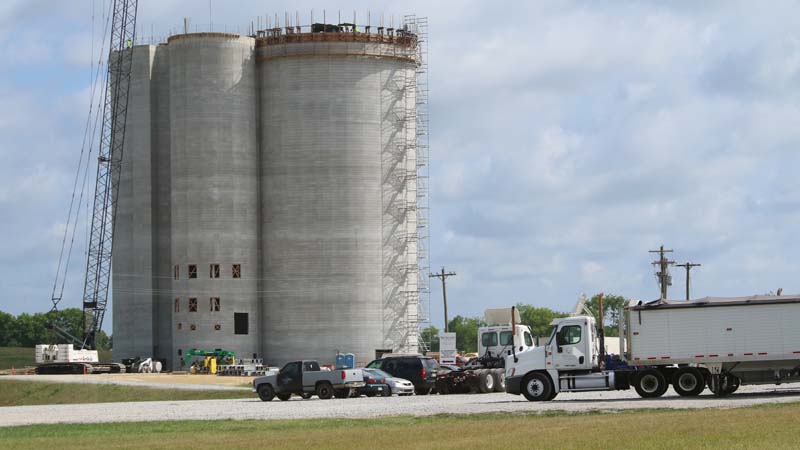 Koch Foods, one of the nation's top poultry processors, looked to Hodgson Concrete to supply concrete for a rather unusual structure: a new grain silo to store chicken feed.

The massive grain silo is the centerpiece of the expanded plant located in South Alabama's rural Lowndes County.

Building the updated facility took months of effort and was a four-stage process. Some phases of construction required continuous product delivery and coordination of up to 30 trucks at a time.​

The project kicked off in early 2016 with pours to construct a series of delivery tunnels. Retired General Manager Bill Hodgson says the walls and tunnels eventually became the sub-basement of the new facility, allowing easy access for rail car and truck loading.

"The tunnels were mostly just poured walls. They did have a floor that was done first. Then a network of tunnels were poured with regular 4000 psi concrete. We did have to send it through a concrete pump so it had to be a pumpable mix," says Hodgson.

Next, Hodgson worked with crews utilizing a special rig to install auger cast pilings designed to support the massive silo.

Each pile is cast in place using a hollow stem auger with continuous flights. The auger is drilled into the soil and/or rock and then slowly extracted, removing the earthen materials as concrete is pumped through the hollow stem.​ Hodgson says the cementitious material pumped into the piles is a specialized 12-bag grout that strengthens to 5,000 psi in 28 days.

"The ground down there was prairie mud. It's very plastic and this is one of the favored methods they used here around Montgomery to stabilize the ground under the foundation," says Hodgson. "The facility was built on that foundation of auger cast piles. A network of piles were installed down under the earth between 20 and 30 feet deep and filled with grout." 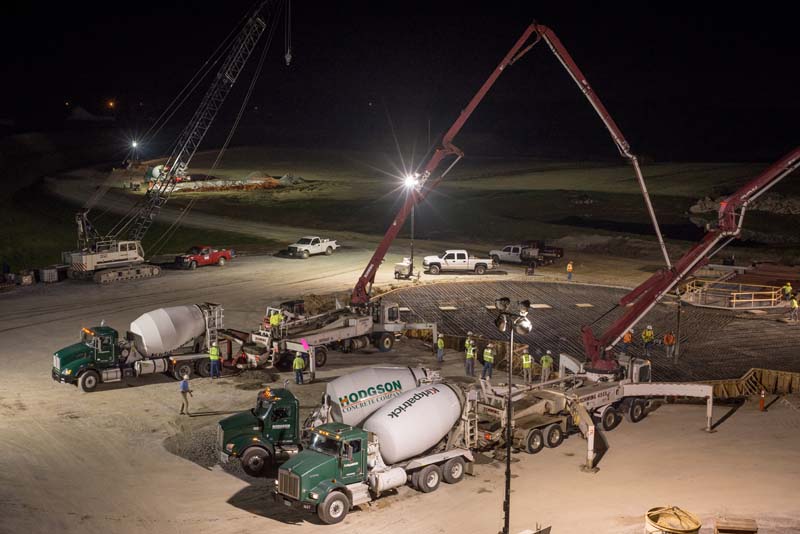 Contractors then moved to lay a large monolithic foundation to tie all the piles together. The foundation incorporated about 2,000 cubic yards of concrete. ​"This was a significant challenge as the contractor required a delivery rate of up to 300 cubic yards per hour to the site," says Hodgson. "Thanks to the cooperation and teamwork from other divisions of the ConcreteSouth group, we were able to dedicate multiple plants and dozens of trucks to this pour to meet the delivery schedule."

Trucks started their deliveries shortly after midnight. Roughly 30 trucks were used to keep up with the fast pace of placement. "Central Dispatch was here for the pour because there were so many trucks involved. Those trucks enabled us to be finished shortly after daylight and everything went smoothly," says Hodgson. "We also had great cooperation from our raw material suppliers. 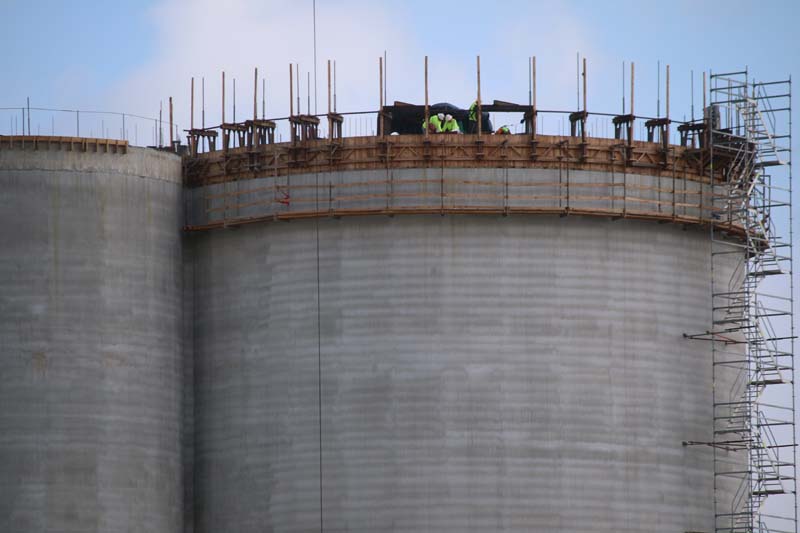 By early summer it was time for the final stage in the expansion project: placement of a massive slip-form silo. "All of the concrete had to be poured into a single hole,” says Hodgson, “and the slip form was moved up a few inches every 15-20 minutes until the contractors reached the top of the structure.”

Scheduling the rural Alabama job was a challenge. For six straight days, crews worked round-the-clock to accommodate the 24-hour a day pours. "The slip form goes much slower," says Hodgson. "They really only want to raise the elevation about a foot every twenty minutes so our deliveries were timed about 24 yards an hour. But once we started, we couldn't stop until it got to the very top so we went for six straight days, 24-hours a day, never stopping."

Hodgson says day and night crews kept the flow of concrete consistent even throughout crew changes. "It took a lot of coordination and the contractor kept us well informed as to what was needed; that's key." Dispatchers were also careful to keep the pace of concrete steady without stacking trucks. Hodgson attributes that complex process to constant communication between the plant and job site.

Keeping the deliveries on track was further complicated by variable temperatures. As overnight lows in the 70s gave way to daytime highs in the 90s, Quality Control had to keep up with the fluctuations. "In order to keep up with the variations and keep the slip-form on schedule, they had to make changes on the fly," says Hodgson. "Our QC folks worked very hard."

Throughout the slow moving week-long pour, extra effort was made to keep truck drivers consistent. "We tried to keep the same people so that the drivers would know what to expect on the job site," says Hodgson. "Also, the contractor was then familiar with them and comfortable with them and knew those drivers could take care of what needed to be done."

Hodgson was able to draw upon the resources of other ConcreteSouth divisions to ensure a successful result. "I can’t say enough about the tremendous effort put forth by our employees to help make this project a success," says Hodgson.

The end result: three impressive 140-foot silos now stand high above the grassy pastures surrounding the facility. "It's a big silo," Hodgson notes, "made up of two 70-foot diameter silos with a 35-foot diameter silo in the middle. It is without a doubt the biggest slip-form concrete structure around Montgomery right now."

Hodgson says he's proud of the confidence Koch Foods has shown in Hodgson Concrete by utilizing them for this long-term project. "They have been very good to us. We're glad to have earned their trust by showing them that we can do what we say we can do."

All phases of the 2016 project were part of Koch Foods investment in state-of the-art technology to advance its processing capabilities and expand its capacity. Koch Foods is a company that prides itself in leading the innovation curve for the poultry industry by investing in regular upgrades to its production facilities. Founded in 1985 as a one-room, 13-employee chicken de-boning and cutting operation, the company is now one of the top poultry processors in the U.S.