All surface defects in concrete are of concern. To think that a short article such as this can address all of the causes and preventative measures for each defect is out of the question. And this is certainly the case for delamination of concrete surfaces.

Most articles say that delamination is similar to blisters. True. They are difficult to detect during finishing but become apparent after the surface has somewhat hardened. Delaminated areas usually show up as cracked, hollow sounding areas, aggravated when crushed under traffic. They may be a few square inches to several square feet in surface area. Blisters usually show up as bumps anywhere from ¼” to 4” in diameter. In both cases, the thickness of the delaminated surface, or the delaminated mortar portion at the surface, is usually 1/8” to ¼”.

The cause: rising bleed water and air become trapped just below the concrete mortar surface that has been prematurely sealed, closed, densified by finishing operations. The Portland Cement Association in their Bulletin IS177T discuss the primary cause is finishing the surface before bleeding has occurred (or while bleeding is occurring). Additionally, it states that delamination is more likely to occur when factors that extend the bleeding time of concrete (cold substrate) are combined with factors that accelerate surface setting (high air temp). 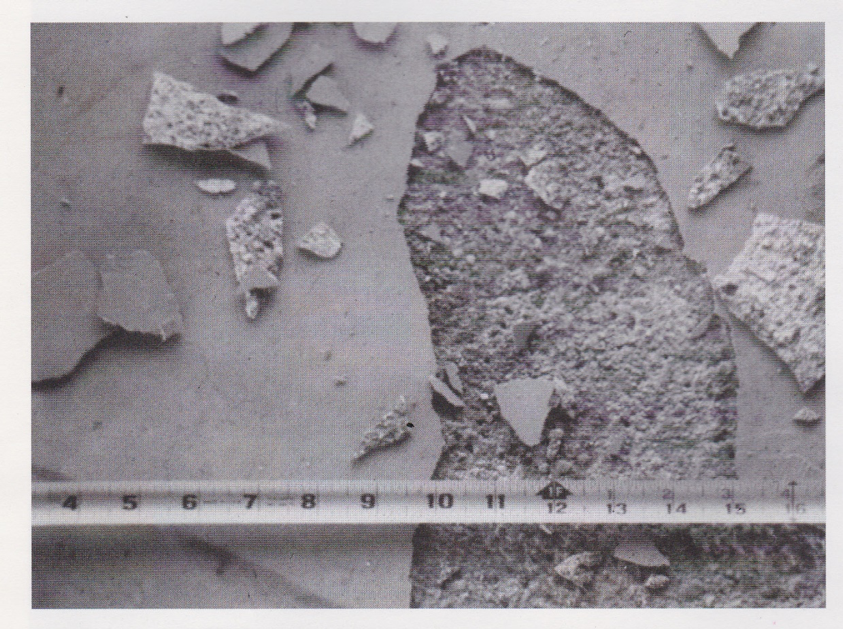 Photo: Delamination as the result of sealing the surface before bleeding has occurred or concluded. Photo taken from PCA IS 177T.

The PCA continues by discussing that finishing the concrete when it is still spongy will tend to force entrapped air toward the surface. Blisters or delamination may not appear after the first pass but as the work progresses during the second or third pass the angle of the trowel blades are usually increased. Air (and perhaps water) is forced ahead of the blade until enough is concentrated to form the blisters or delamination. If these defects are noticed during finishing, a second floating may reduce them and a delayed troweling will depress them, although complete bond may not re-establish. So great attention must be focused onto this effort.

The National Ready Mixed Concrete Association in their CIP-20 add to the above PCA discussion by saying that delamination occurs when the fresh concrete surface is sealed while the concrete is still plastic and continues to bleed water and/or release air. Delaminations form fairly late in the finishing process after floating and after the first troweling pass. They can, however, form during the floating operation if the surface is overworked and densified.

A delayed initial set and a reduction in the rate of bleeding will increase the chances for delamination and blisters. Entrained air in concrete reduces the bleed rate because the air has a blocking effect on the bleed channels. A cool subgrade delays set in the slab bottom relative to the slab top.

DELAMINATION AND BLISTERING IS MORE LIKELY TO FORM IF:

How to prevent delamination and blisters: This sometimes can be a tough one. The finisher is closely watching the concrete surface. He makes indents in the surface with his fingertips and then his boots. Unfortunately, sometimes these efforts lead to the wrong conclusion if the surface appears “ready” due to heat and high evaporation at the surface. I will say, though, on one job, I observed a finisher that had placed a trash-can lid on the surface. Periodically he would look under it to check for bleed water and bleed rate. He knew that the covered area wouldn’t be affected by the wind or sun (thereby giving false indications). He adjusted his finishing plan accordingly

REPAIR OF DELAMINATION AND BLISTERS: