Finishing concrete while bleed water is on the surface is one of the primary causes of surface defects in concrete slabs. In particular, and the topic of this discussion, is dusting concrete surfaces and the low wear resistance / durability of those surfaces.

Dusting itself is explained as a fine, powdery material that easily rubs off the surface of hardened concrete. It is the result of, and sometimes referred to, as “laitance”, which is usually defined as a thin weak layer at the surface comprised of water, cementitious materials, and aggregate fines. Laitance is the weakest, less dense, most permeable, and least wear resistance form of concrete. It is always at the surface where the most durable and wear resistant concrete needs to be.

E.O. Goeb, PE (1994) said it appropriately, “The dusting floors that can’t be blamed on unvented heaters in cold weather construction are most likely caused by a combination of wet concrete, excessive bleeding, premature troweling, and lack of curing.”. 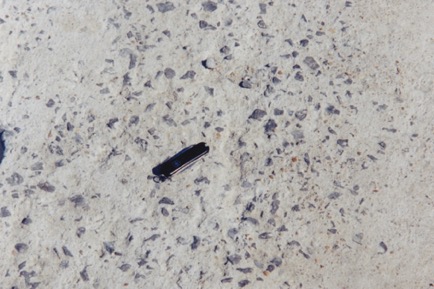 To illustrate: This photo shows a severely eroded slab surface caused by dusting/laitance. The location is near a gutter down-spout where a test core was to be drilled.

Floating and troweling concrete with bleed water at the surface works/mixes that water back into the surface. This increases the water/cement ratio, weakening the concrete strength and durability at the surface, causing dusting. Additional causes would include; applying water to the surface (as I’ve seen with the spray hose), an unexpected rainfall during finishing, too wet a mix, lack of proper curing leading to dehydration at the surface, and too low of a cement content mix design.

Needless to say, in severe cases, a dusting or weakened surface leads to more than just a surface dusting condition. The soft, weak surface of the slab wears/erodes down to the harder and more durable portion of the slab, the “body” of the slab. This is usually the coarse aggregate fraction of the concrete and the surrounding stronger mortar fraction of the concrete. Most common areas of wear or erosion are: under rain downspouts, where the flowing water erodes away the surface, the vehicle tire turning areas of the driveway where the tire tread digs into the surface, and the heavy foot traffic areas.

Generally speaking, a drilled core taken in a severe dusting area would most likely produce acceptable compressive strength results. This sounds counter intuitive but is due to the procedure that is performed during the core preparation process. The ends of the core, including the soft eroding portion, are saw cut/trimmed off to provide for a smooth surface for the application of a “cap” prior to placing the core into the compression testing machine. Again, the material trimmed away is usually the dusted/laitance area. What is left is the more solid, stronger “body” of the core. And actually, the resulting compressive strength values of the concrete do represent what was delivered out of the ready mix truck. 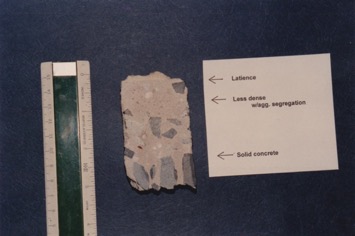 This photo is a cross section cut from a drilled test core near the eroded concrete above. It shows, from the top surface down; Laitance, then the less dense concrete with a minimum amount of coarse aggregate (segregation), then dense, normal strength concrete

The repair for this problem is time consuming and costly; resurfacing, overlays, or removal and replacement. In resurfacing, grinding off the thin layer of laitance to expose the solid concrete underneath is available. Another method is the application of a surface chemical hardener, usually a sodium silicate or metallic silicofluoride product (PCA IS177 2001). (Proprietary products are available.) This treatment, though, is usually not the end-all to a severe problem, but will usually reduce the effects of dusting and usually improve wear ability.

In conclusion, avoid the pitfalls of high water contents at the surface of the concrete slab…and still strongly relating this dusting topic, I’ll close on this final word: CURING.

My observation has been that the curing of concrete, especially in the residential and light commercial areas is largely a neglected effort. If the concrete is allowed to dry, or dehydrate, then the strength gain process of the concrete generally stops. At the surface of the concrete slab we need the most strength possible. So, for concreting, being mindful of heat, wind, low humidity…all the factors that lead to excessive evaporation of the surface moisture…. promote the strength gain by curing and keeping the moisture in.