Discoloration of concrete, especially in a residential driveway, is generally not acceptable to the builder and homeowner. One such form of this discoloration can be seen as dark gray “spots”…somewhat rounded, about 1” to 6” in diameter. At first glance the speculation is that they are probably oil drippings, perhaps from work vehicles or construction equipment. 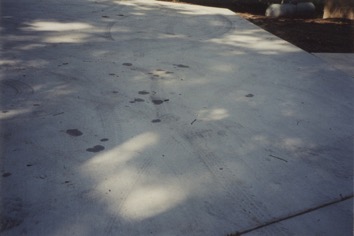 During the concrete placing process, a “clump” of dirt will get encased in the concrete. Where does it usually come from? To speculate....tracked in on workman’s boots, non-uniform grading, the tires on the concrete truck? Interestingly enough, during every one of my inspections I have always inspected the aggregate stockpile area of the ready mix plant. Never have I found this to be the source. But, whatever the source, that clump gets floated/finished over with a relatively thin layer of the mortar fraction of the concrete. Sometimes the layer is barely ¼” thick. The dirt is now hidden from view. The surface looks good now. The concrete sets, and still looks acceptable…but only for a short period of time.

The dark gray discoloration is caused by varying degrees of hydration of the cement in the concrete, caused by the varying moisture contents in the localized areas of the total concrete.

For example: concrete that is 4” thick will have more moisture in it than a thin layer (say ¼” thick) of mortar that is hiding the clump of dirt. The dirt ball from below and the air from above will draw the moisture from that thin layer of mortar. The resulting color of the surface is very dependent on the amount of moisture and the curing/drying conditions of the slab. These conditions lead to areas of higher and lower water-cement ratios, with the result ending in dark spots (thin mortar coverage...low moisture content) and lighter surrounding areas (full thickness of the slab...higher moisture content). 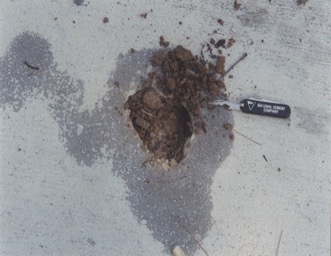 With the skim-coating of mortar broken away the dirt is exposed.

A comparison example of light and dark areas in slabs could be: a hard steel trowel finish is always going to be darker than a slab with a wet, floated surface….the more you trowel, the less moisture…..the darker the surface.

To finish up on the topic of the dirt clumps; the thin layer of mortar covering the clumps usually cracks and breaks up in a relatively short period of time, especially after vehicle traffic begins. This usually exposes the dirt. Left un-repaired, weeds usually start growing in the holes.

As for repair: The holes and discolored areas can be chipped out (w/square cut sides) to solid concrete, cleaned of all dirt, etc., then filled with a mixture of 1 part Portland cement : 3 to 4 parts sand. Depending on the size of the hole, some 3/8” coarse aggregate can be added (ratio; 1 part cement: 2 parts sand: 3 parts coarse agg). Water content should be adequate enough to produce a workable but not overly wet mixture. Coating the mating surfaces of the repair with a bonding agent is helpful. Proprietary pre-blended products are available as well. As always, a sample repair area should be completed to ensure an acceptable color match and surface texture to the existing, surrounding concrete.